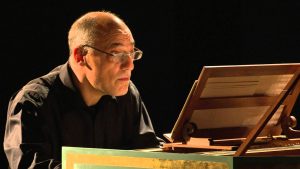 Undoubtedly one of the most prominent harpsichord and forte piano performers in the world, Andreas Staier (see photo left) embarked upon a solo career in 1986 and, since then, his indisputable musical mastery has made its mark on the interpretation of baroque, classical and romantic repertoire.

Born in Göttingen in 1955, Andreas studied modern piano and harpsichord in Hannover and Amsterdam. For three years, he was the harpsichordist of Musica Antiqua Köln with whom he toured and recorded extensively.
As a soloist, Staier performs throughout Europe, the United States and Japan with orchestras such as Concerto Köln, the Freiburger Barockorchester, the Akademie für alte Musik Berlin and the Orchestre des Champs – Elysées Paris.

Andreas Staier has performed with internationally renowned artists such as Anne Sophie von Otter, Pedro Memelsdorff, Alexei Lubimov and Christine Schornsheim. A close collaboration over 20 years with tenor Christoph Prégardien is attested to in their recordings of German lieder by Schubert, Schumann, Mendelssohn, Beethoven, Lachner and Brahms and he has formed a piano-trio with violinist Daniel Sepec and cellist Roel Dieltiens.

In 2001, Andreas gave the world premiere of ‘Contra-Sonata’, a work for fortepiano by the French composer Brice Pauset, which he also recorded for AEON. The world premiere of the ‘Contra-Concerto’ will follow in Philharmonie, Berlin on 20th October 2011, together with the Freiburger Barockorchester. His extensive discography has won great critical awards from the international press, whether for BMG, Teldec Classics (with whom he had an exclusive contract for seven years) or Harmonia Mundi France, for whom he records since 2003. Among these internationally highly acclaimed recordings are: a CD with Beethoven sonatas with violinist Daniel Sepec, on Beethoven’s own instrument, and together with Sepec and cellist Jean-Guihen Queyras a CD with Beethoven trio’s. A Mozart CD performing on Johann Andreas Stein’s vis-à-vis instrument with German harpsichordist Christine Schornsheim was awarded the Diapason d’Or and the CHOC du Monde de la Musique. After the latest recording featuring the Goldberg Variations (which has recently won the Dutch Edison in 2011), the Diabelli Variations will follow at the end of the 2011/12 season